Fort McMurray is commonly referred to and thought of as being a city, which it was from 1980 until 1995. However, Fort McMurray lost its city status on April 1, 1995, when it reverted to being an unincorporated community. At that time, Fort McMurray was merged with Improvement District No. 18 to become Regional Municipality of Wood Buffalo, in the northeastern part of Alberta, Canada. Fort McMurray remains a designation used by Canada Post for mail delivery in this area.

Before the arrival of Europeans in the late 18th Century, the Cree were the dominant First Nations people in the Fort McMurray area. The oil sands were known to the locals and the surface deposits were actually used to waterproof their canoes. In 1778, the first of the European explorers, Peter Pond, came to the region in search of furs as the European demand for this commodity at the time was strong. Peter Pond explored the region further south along the Athabasca River and the Clearwater River, but chose to set up a trading post much farther north by the Athabasca River near Lake Athabasca. However, his post closed in 1788 in favour of Fort Chipewyan, now the oldest continuous settlement in Alberta.

In 1790, the explorer Alexander MacKenzie made the first recorded description of the oil sands. By that time, trading between the explorers and the Cree was already occurring at the confluence of the Clearwater and Athabasca Rivers. The Hudson's Bay Company and the North West company were in fierce competition in this region. Fort McMurray was established there as a Hudson's Bay Company post by 1870, and continued to operate as a transportation stopover in the decades afterwards.

The community has played a significant role in the history of the petroleum industry in Canada. Oil exploration is known to have occurred as early as the early 20th Century, but Fort McMurray's population remained very small, no more than a few hundred people. By 1921 there was serious interest in developing a refining plant to separate the oil from the sands. Alcan Oil Company was the first outfit to begin bulk tests at Fort McMurray. The nearby community of Waterways was established to provide a terminus for waterborne transportation, until 1925, when the railway reached there.

Abasands Oil was the first company to successfully extract oil from the oil sands through hot water extraction by the 1930s, but production was very low. Fort McMurray gradually grew to over 1,100 by World War II, and Fort McMurray was set up by the US and Canadian forces as staging ground for the Canol project.

Fort McMurray and Waterways amalgamated as the village of McMurray (the "Fort" was dropped until 1962, when it was restored to reflect its heritage) by 1947, and became a town a year later. Fort McMurray was granted the status of new town so it could get more provincial funding. By 1966, the town's population was over 2,000.

In 1967, the Great Canadian Oil Sands(now Suncor) plant opened and Fort McMurray's growth took off afterwards. More oil sands plants were opened up, especially after 1973 and 1979, when serious political tensions and conflicts in the Middle East triggered oil price spikes. The population of the city reached 6,743 by 1971 and climbed swiftly to 30,772 by 1981, a year after its incorporation as a city.

The city continued to grow for a few years even after the oil bust caused by the collapse in world oil prices and the National Energy Program, which was scrapped after the Progressive Conservative Party formed the Government of Canada in 1984. The population peaked at almost 37,000, just before it declined to under 34,000 by 1987. Low oil prices since the oil price collapse in 1986 slowed the oil sands production greatly, as oil extraction from the oilsands is a very expensive process and lower world prices made this highly uneconomical.

On April 1, 1995, the City of Fort McMurray and Improvement District No. 18 were amalgamated to form the Regional Municipality of Wood Buffalo. Since then, Fort McMurray lost its status as an incorporated city, and is referred to as a urban service area. The entire regional municipality is under a single government, although Fort McMurray is the seat of this government.

Fort McMurray is 435 kilometres (270 mi) northeast of Edmonton, Alberta on Highway 63, about 60 kilometres (37 mi) west of the Saskatchewan border, nestled in the boreal forest at the confluence of the Athabasca River and the Clearwater River. It is located 370 metres (1,214 ft) above sea level. Fort McMurray is the largest community in the Regional Municipality of Wood Buffalo.

The population of Fort McMurray was 64,441 in 2006. It has experienced a sustained annual average growth rate of 8.5 per cent between 1999 and 2006. Forecasts from the Regional Municipality of Wood Buffalo's Strategic Planning and Policy Division indicate that the city will reach a population of 100,000 by 2012.

Fort McMurray is a multicultural community, attracting people from all corners of Canada and the world. Albertans make up almost half the number of migrants to Fort McMurray, followed by 17% of people originating from the province of Newfoundland and Labrador. Were it a city, it would be the fifth largest in Alberta (after Fort McMurray, Edmonton, Red Deer and Lethbridge).

Fort McMurray has a borderline humid continental climate (Koppen climate classification Dfb, just above a subarctic climate), with long, very cold winters and fairly warm but short summers. Temperatures average -19°C in winter with the lowest recorded -50.6°C, (-58°F). In July temperatures average 17°C, with the highest recorded being 37°C in August. Its annual precipitation amounts to 455.5 millimetres (17.9 in)" Housing prices and rents are far higher in Fort McMurray than one would expect in such a remote area. In 2006, Fort McMurray had the highest prices in Alberta. The Albertan government has promised to release more Crown land for residential construction, particularly in Timberlea on the north side. 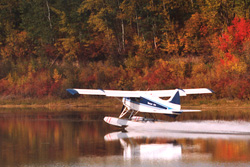 Greyhound Canada and Red Arrow operate scheduled passenger bus services to Edmonton and other communities along Highway 63, as well as other destinations further south.

Highway 63 is the only highway between Fort McMurray and Edmonton. Due to the industrial demands of the oilsands, Highway 63 boasts some of the highest tonnage per kilometer in Canada, and the largest and heaviest loads that trucks have ever carried. Construction to twin Highway 63 began in the summer of 2007. Highway 881 also provides access to the region from Lac La Biche.

CN Rail operates a rail line between Fort McMurray and Edmonton and CPR has proposed building a new high-capacity line to the area. VIA Rail Canada discontinued passenger rail service to Fort McMurray in 1989 and service has not been restored since.

The Fort McMurray Public and Catholic School Districts both serve the Primary, Elementary, and Secondary Education needs of students in Fort McMurray.

Based in the Abasand subdivision, Centre Boreal Francophone School serves the needs of Francophone students in the area.

Keyano College is a publicly funded college and vocational institute based in the area known for both its Musical Instrument Repair diploma as well as for its role in training workers for the Oil Sands. Known as the cultural hub of the Regional Municipality of Wood Buffalo, Keyano College has two state-of-the-art theatres and hosts a variety of musical and theatrical events that attract upwards of 50,000 visitors each season.

Data is supplied by Pillar 9™ MLS® System. Pillar 9™ is the owner of the copyright in its MLS® System. Data is deemed reliable but is not guaranteed accurate by Pillar 9™. The trademarks MLS®, Multiple Listing Service® and the associated logos are owned by The Canadian Real Estate Association (CREA) and identify the quality of services provided by real estate professionals who are members of CREA. Used under license